Massimo Florio is Professor of Public Economics at the Department of Economics, Management and Quantitative Methods at Università degli Studi di Milano. Awarded by the European Commission a Jean Monnet Chair “Ad Personam” of EU Industrial Policy, he has been the scientific coordinator of a Jean Monnet network of six universities. His main research interests are in applied welfare economics, cost-benefit analysis, industrial and regional policies, infrastructure and growth, privatization, public enterprise and socio-economic impact of research infrastructures.

University of Milan
Department of Economics, Management and Quantitative Method
Via Conservatorio 7
20122 Milan

Evaluating the welfare impact of the British privatisations 1979-1997, The Mit Press, 2004, authored by Massimo Florio 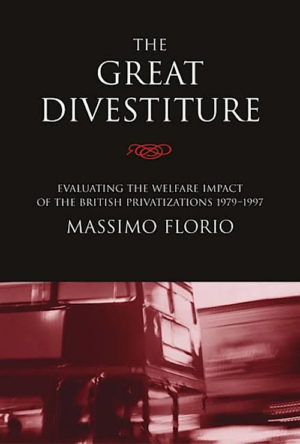 The privatization carried out under the Thatcher and Major governments in Britain has been widely (although not universally) considered a success, and has greatly influenced the privatization of state industries in the transition economies of Eastern Europe. Massimo Florio’s systematic analysis is the first comprehensive treatment of the overall welfare impact of this broad national policy of divestiture. Using the tools of social cost-benefit analysis, Florio assesses the effect of privatization on consumers, taxpayers, firms, shareholders, and workers. His conclusion may be surprising to some; his findings suggest that the changeover to private ownership per se had little effect on long-term trends in prices and productivity in Britain and contributed to regressive redistribution.

“Much the same applies to telecommunications and water. The most authoritative analysis of privatisation in Britain – The Great Divestiture: Evaluating the Welfare Impactof the British Privatisations 1979-97, by Massimo Florio – utterly destroys the myth that privatisation has led to any long-term gains in productivity or efficiency, and documents the major costs in terms of welfare and communal benefit. In addition there has been a key loss of strategic control. Previously, during the high growth of the post-war years (1948-73), R&D investment in energy, transport and telecommunications has positive feedback on manufacturing. Over the last 30 years however the sharp decline in British R&D has cumulatively weakened the UK industrial effort.”

“The book takes many of the supposed truths and demolishes them one by one.”

“This book should be applauded for its depth, breath, historical scope, preparedness to combine methods and data types where advantageous, and for its determination not to oversimplify an obviously complex issue. It provides an excellent resource for different types of readers and should have a wide audience.”

Andrew Mearman, University of the West of England – Economic Issues

“In this excellent book, Massimo Florio, Professor of Public Economics at the University of Milan, carefully assesses the impact of Britain’s privatisation programme under the Conservative governments of Margaret Thatcher and John Major, the largest experiment of its kind in any capitalist country.”

Will Podmore – Tribune magazine “What the Tory programme of privatisation really did to Britain” (May 5, 2009)

“There is much to admire in this important book. Florio presents the first comprehensive analysis of the single most important national privatization program to date.”

“Starting from the viewpoint that the continental social model has virtues (Florio is a professor at the University of Milan and a European Commission advisor), it sees the privatization process as a regrettable consequence of British managers’ and politicians’ failure to create a perception of the valuable social purpose of their state enterprises, akin to that alleged to have been created in Britain for the NHS or on the continent for ENEL or Electricité de France.”

“Florio (University of Milan) not only pulls together recent studies that evaluate the impact of this divestiture program but also carries the analysis forward. His nuanced approach in this superbly convincing monograph skewers the myth of divestiture’s success.”

“Florio holds the Jean Monnet Chair in the Economics of European Integration at Milan University. Such as an academic title might deter some readers from proceeding, but his research findings merit close attention. As a Visiting Professor at the LSE, Florio was able to collect a vast array of research material for this book. However, he can hardly be described as a fan of the UK privatization process, first triggered by the Labour government in 1976 when it was obliged by the IMF to sell shares in BP to raise some desperately needed cash.”

“Florio has written a detailed study of just about every economic aspect of British privatization under Thatcher and major that anyone could think of. It should be clear that is a work by an author whose range extends economics into broader aspects of policy. The book is challenging and thought-provoking, and I hope it will be widely read.”

“Sometimes, it takes an outsider to clearly see how a topic of national importance might be tackled in a comprehensive way. This is the key strength of Massimo Florio’s impressive text on UK privatization. Most British-based researchers who witnessed the Conservative privatization programme have only seen fit to anlyse parts of the programme: either looking at it thematically (e. g. its impact on share prioces) or from the perspective of a single industry (e. g. telecoms). Florio, on the other hand, looks at the public enterprice divestiture programme as a whole and attempts to analyse its effects on firms, shareholders, employees, consumers and tax payers.”

“The analysis conducted by this distinguished academic is so important that is ought to be made compulsory reading for every member of Tony Blair’s Government. The Prime Minister himself might find it useful to glance through the concluding chapter entitled A State without Ownership. It might – just might – help him to put a different perspective on the “miracle” of the Thatcher years.”

“In all, the book is highly recommended and serves a needed reminder – that just because something is said frequently, it does not make true.”

“Hitherto, one could not find the results of privatisation so systematically understood and presented.”

“Massimo Florio has produced the most thorough quantitative analysis to date of how British privatizations affected investors, consumers employees, and government finances. His results are persuasive and in many ways surprising. Anyone with an interest in past or future privatizations should take notice”

“A view has developed that privatization process formed a watershed in U. K. economic and political development. This book gathers an impressive range or evidence to test the economic reality behind this perspective. The stripping bare of the political rhetoric with clinical economic analysis makes for fascinating reading, and the book’s conclusions have much to contribute to ongoing policy debates. Very highly recommended”

“In the current climate, when the World bank is totally committed to privatization and the European Union to liberalization of markets, a critical, in-depth evaluation of the British privatization program is long overdue Florio’s book is impressive in its analytical foundations and empirical content. Some major features of British privatizations are brought out clearly: the under pricing of assets, the huge decline in the public net worth, the large rise in management turnover. An important message is that privatization (as opposed to deregulation) made little difference to long-term trends in productivity and prices. These are controversial findings that will be of great interest to all students of privatization”